Good quality water is the foundation of soilless growing, however not everyone is blessed with a suitable water source for hydroponics. Even a clear, sparkling water may contain a range of minerals, water treatment chemicals and pathogens which can damage plants and slow growth. Luckily water is relatively easy to treat and some growers choose to install small reverse osmosis (RO) units just to ensure their water is always top quality.

Water can be sourced from wells, collected from roofs, streams, rivers and dams, however many growers are reliant on municipal or city water supplies and while these are usually safe to drink, they can sometimes pose problems for plant growth. The main quality problems encountered with different water types are: 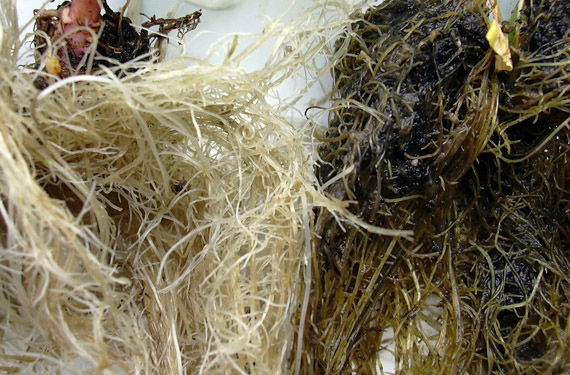 Some water sources can carry plant disease pathogens such as Pythium which cause root browning and death if they take hold of a weakened plant.

Ground water sourced from rivers, streams or stored in dams/reservoirs typically poses the most problems for soilless growers, particularly if the water is not treated before use. Water which is continually exposed to air and soil becomes contaminated with organic matter, minerals leach from the surrounding area, and pathogen spore loading can be high.

Many greenhouse operations use open air storage dams as an economic method of holding large volumes of water collected from greenhouse roofs or other surfaces, however this water is typically filtered and treated before use. River or stream water often has inconsistent water quality as operations being carried out up stream affect composition of the water and rainfall and flow rates also fluccuate throughout the year.

Water from wells in different locations around the world can vary considerably in quality. Very deep wells passing through certain soil layers will give an almost `filtered water’ although some minerals are always likely to be present in ground water. Some wells, particularly older types, or those which have been poorly maintained and are shallow can present problems with contamination from pathogens, nematodes and agrichemicals leached through the upper soil layers into the well water.

Well water may be `hard’ and contain levels of dissolved minerals such as calcium and magnesium and other elements depending on the soil type surrounding the well. High levels of sodium and trace elements are the most problematic for hydroponic growers, levels in excess of 2000ppm sodium have been found in inland well waters in some arid regions, although most well waters don’t pose such an extreme problem. Sodium is not taken up by plants to any large extent, hence accumulates in recirculating systems displacing other elements. Trace elements in ground water, such as copper, boron and zinc may sometimes occur at high levels. Soilless growers utilizing well water are advised to have a complete analysis carried out on their water source to determine if any potential problems exist 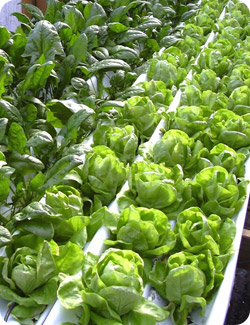 Recirculating systems such as NFT can
compound some water problems and
unwanted elements such as sodium
can accumulate over time.

is generally low in minerals, however acid rain from industrial areas, sodium from coastal sites and high pathogen spore loads from agricultural areas do still occur. Much of this contamination has been found to happen when rain water falls on roof surfaces and picks up organic matter, dust and pollutants which naturally collect there. In fact numerous studies have shown that due to contamination following contact with catchments surfaces, stored rainwater often does not meet the WHO guideline standards for drinking water especially with respect to microbial contamination.

In the USA rainwater collected within 48Km of urban centers is not recommended for drinking due to atmospheric pollution. While drinking water standards don’t necessarily apply to hydroponic growing, the fact that high levels of microbial contamination often occur in stored rainwater, means that common plant pathogen spores are also likely to be present. Rain water is best collected from clean surfaces with a `first flush’ device installed which allows the first few minutes of rainfall to be discharged from the roof before any is collected for use.

Rain water may also contain traces of zinc and lead5 from galvanized roof surfaces or where lead flashings and paint may have been used and is a greater problem with the pH of the rain water is low. Generally rain water collected from greenhouse roofs is free of zinc and lead problems.

'hard' or 'soft' are terms used to describe the quality of many water sources. Hard water has a high mineral content, usually originating from magnesium, calcium carbonate, bicarbonate or calcium sulphate, which can cause hard white lime scale to form on surfaces and growing equipment. Hard water may also have a high alkalinity and high pH, meaning that considerably more acid is required to lower the pH in the hydroponic system to ideal levels.

While hard water sources do contain useful minerals (Ca and Mg), they can upset the balance of the nutrient solution and make other ions less available for plant uptake. Smaller growers can counteract this by making use of one of the many `hard water’ nutrient products on the market. Soft water in comparison, is a low mineral water source, often rainwater is `soft’, while municipal water sources across the country range from very hard to soft, depending on where the individual city water supply is taken from.

Some growers prefer to start with water which has been pre treated to remove any chemicals, pathogens and other contaminates. RO (reverse osmosis), distilled water, filtered and bottled water are all options for small growing systems and those concerned with water quality.

How a particular water source is treated, either before it reaches the grower or after, has a large influence on its quality. City supplies of water are treated to ensure that the water meets the World Health Organization standards for mineral, chemical and biological contamination. This means there is quite a wide range of water treatment chemicals which may be added to a city water supply – many are for pathogen control, however hard water may also be treated with `water softener’ chemicals, acidic water may have pH adjustment, fluoride may be added and other chemicals used to remove organic matter.

These aim to produce a water which is safe for drinking, won’t corrode pipes, leave lime scale deposits, have an offensive smell or stain and be generally acceptable for human use. However what is safe for people, may not be suitable for plants, particularly those in water culture and recirculating systems with little growing media to act as a buffer.

Solution culture systems don’t have the
buffering capacity of those using a soilless
substrate so are more prone to problems
with water quality.

Many city water sources are perfectly acceptable for soilless growers and hydroponic systems and can be used with no adjustment or treatment. However water treatment options used by city water suppliers change over time and with advancing technology. In the past, the main concern was chlorine in city water supplies. Chlorine is a disinfection agent which destroys bacteria and human pathogens, and residual chlorine can be detected by smell in a water source. High levels of chlorine can be toxic to sensitive plants, however chlorine is a chemical which rapidly dissipates into the air and could easily be removed by aerating the water or just letting the water sit or age for a few days before use.

While chlorination of water supplies was easy to deal with, nowadays, city water treatment plants are moving more towards the use of other methods of treating drinking water. It has been found that some human pathogens were resistant to the action of chlorine, so this meant that the drinking water regulations changed and alternative disinfection methods are being used more frequently.

These days water may still be chlorinated, but an increasing number of city water supplies have switched to use of ozone, UV light, chloramines, and chlorine dioxide. While many of these methods are not a problem for hydroponics and soilless growers, the use of chloramines and other chemicals by many city water treatment plants can pose a problem for plants where high levels are regularly dosed into water supplies.

Chloramines are much more persistent than chlorine and take a lot longer to dissipate from treated water, hence they can build up in hydroponic systems and cause plant damage. Damage to plants caused by chloramines in city water supplies is also very difficult to diagnose as it looks similar to many root rot pathogens and growers aren’t usually aware of what is causing the problem. Also some plants are naturally much more sensitive to chloramines than others, so determining levels of toxicity has also been difficult. One hydroponic research study estimated that the critical chloramine amount at which lettuce plant growth was significantly inhibited was 0.18 mg Cl/g root fresh weight.

Hydroponic growers who have concerns about the use of chloramines in their city water supply can treat the water with use of specifically designed activated carbon filters or use of dechloraminating chemical or water conditioners which are sold by the aquarium trade to treat the water for fish tanks. The chloramine carbon filters must be of the correct type that has a high quality granular activated carbon that allows for a long contact time which is required for chloramine removal.

Other common water quality problems include the use of `water softener’ chemical either by city treatment plants, or in the home – these are often sodium salts which result in problematic sodium levels in the hydroponic nutrient. If sodium levels are too high, either through use of water softener chemicals or naturally occurring in the water supply, RO is the best option for sodium sensitive crops.

Your cart is currently empty.